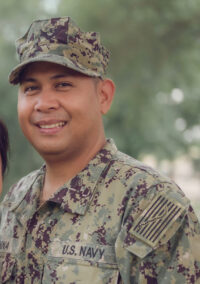 Navy Hospital Corpsman Jovy Darwin Mina is transitioning out of the military using the DOD SkillBridge Program, giving him the opportunity to pursue his new passion for welding and metal fabrication and affording him more time to spend with his family.

A native of the Philippines, Mina immigrated to the United States in 2016 to support his wife, Veronica, in achieving her dream of becoming a registered nurse and living stateside to be close to her family; many of whom are Navy veterans and encouraged Mina to enlist after he expressed interest in joining the military.

“Back in the Philippines, I was amazed anytime I saw the U.S. military and thought I would like to join one of the branches if I got the chance,” he said. “I’ve always liked helping people and wanted to serve, so my wife and her relatives encouraged me to join the Navy.”

During his time in the Navy, Mina provided emergency medical treatment at military hospitals across the country and received the Humanitarian Service Medal for administering vaccines during the coronavirus pandemic. Stationed at NAS Jacksonville, Mina decided to transition out of the military so he could spend more with his wife and their now two-year-old child.

Mina’s commander recommended finding a SkillBridge internship that interested him before separating and through the DOD SkillBridge website he found Veterans Florida, the state’s designated SkillBridge assistance organization.

DOD SkillBridge enables active-duty servicemembers with commander approval to gain work experience with employers within six months of separating or retiring from the military. SkillBridge participants maintain their DOD salary and benefits during the training period.

“I couldn’t believe that you could train for a new job and they still pay you,” Mina said, recalling that he thought to himself “there’s got to be a catch.”

Mina was an electrical engineer in the Philippines, and although he had no prior experience in welding or fabrication, he wanted to learn a new trade to use for a manufacturing career. He reached out to Veterans Florida and upon learning about his interest in manufacturing, our VETS team assisted him with his resume and connected him to the SkillBridge internship with S&B Metal Products at their Lakeland facility, where he started work in September.

“I’m really enjoying it so far and it’s become a new passion for me… once I had a good understanding of how to use the machines, they really gave me the freedom to practice on a bunch of metal fabrication projects.”

During his SkillBridge internship at S&B, Mina’s receiving hands-on training for MIG and TIG welding and operating a laser cutting machine as well as learned about the metal fabrication process.

“I’m really enjoying it so far and it’s become a new passion for me,” Mina said, adding that making his wife a multifunctional metal cell phone stand/holder for his wife has been one of his favorite projects. “Once I had a good understanding of how to use the machines, they really gave me the freedom to practice on a bunch of metal fabrication projects.” 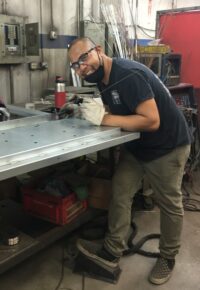 Charlie Balliette, Marine veteran and S&B Metal Products Director of Risk Management and Human Resources, discovered DOD SkillBridge on a web call with other manufacturers and reached out to Veterans Florida to implement trainings at their facilities.

“When we spoke to Veterans Florida, they helped us to create and approve the curriculum to be malleable and include welding, press brake, and laser operator,” Balliette said.

Recalling his own experience transitioning out of the military, Balliette sees SkillBridge having a positive impact on a servicemembers’ life both in and outside of work and believes their SkillBridge internship appeals to a lot of active duty who’d enjoy putting their skills toward building parts and products that are used across many different industries.

“There is a gap between someone who comes out of high school and someone who goes into the military. It’s one thing to not have gone to college, but it’s another thing to not have a marketable skill set in the workforce being in your twenties or even older.” Balliette said. “That to me is the part that SkillBridge really does address in a way that I never saw in my time in the military; where once you decide you’re getting out it used to be pretty much ‘here’s your plane ticket and good luck to you.’”

“I 100% recommend it. There are a lot of opportunities out there, and SkillBridge is a great way to gain valuable experience at a company.”

Baliette recommended implementing SkillBridge trainings to S&B Metal Products President Brent Cessna and he immediately fully supported the idea, seeing it as a great opportunity to help servicemembers bridge the skills gap and return to civilian life while also building a pipeline for the company to develop the next generation of welders and operators.

“In our experience in manufacturing, we’ve been around going on close to fifty years and what we’ve found over the years is that we’ve had very good luck with ex-Armed Forces employees,” Cessna said. “They’re quick to learn, reliable, and have a good head on their shoulders. Any time we’ve had an opportunity to bring a servicemember in, it’s always been a huge benefit to us.”

Cessna said the requirements for the internship are “very minimal” and servicemembers are offered a position at the company upon finishing their SkillBridge internship and completing their military service.

“We happen to be in a very unique position, where we have multiple facilities and have hundreds of years of expertise throughout those facilities and can bring in servicemembers with a completely clean slate and train them up,” Cessna said. “We’re providing them with a skill set that is transferable basically anywhere in the United States and anywhere in the world where there’s welding. Ultimately, the end goal for us is to provide them with a skilled trade and employ them.”

Mina’s SkillBridge internship ends in December, and afterward, he plans to start a career in welding while working toward long-term goals of becoming either an X-ray technician or going into the biomedical engineering field.

For servicemembers planning their separation or retirement, Mina strongly recommends finding a SkillBridge internship before transitioning out of the military. He advises looking for one in an industry that interests you and added that Florida’s low cost of living and resources and benefits make it an attractive option for veterans.

“I 100% recommend it. There are a lot of opportunities out there, and SkillBridge is a great way to gain valuable experience at a company,” Mina said. “With SkillBridge, I got the chance to learn new welding and fabrication skills, and it gave me the freedom to spend more time with my family.”