U.S. Marine Corps veteran Omar Fuentes always knew he wanted to go into business. Determined to solve some of the healthcare industry’s biggest problems, he started his business, accelEQ, in Florida — praising the state for giving him the resources and freedom to turn his idea into reality.

Originally from New York, Fuentes’ family moved to Tampa, where he enlisted in the Marines. After graduating top of his class, he joined the Marine Corps Security Forces Regiment in Virginia tasked with supporting urban warfare and security operations, eventually transferring to the training department to train new recruits following 9/11.

“It was an experience that laid the foundation of my abilities; to be tenacious, strategic, and knowing how to execute and deal with obstacles as they come,” Fuentes said of his military service. “I would not trade that for the world.”

Fuentes transitioned out of the military and knew his future would “be in business.” A friend suggested going into finance and after spending time in investment consulting, he found a path into the healthcare industry; where he would leverage his experience in the Marines to help him climb the corporate ladder and accumulate close to 14 years of experience at some of the largest healthcare organizations.

The “catalyst” for founding accelEQ came following the passing of his father and brother and his wife’s cancer diagnosis — all of which Fuentes said could’ve either been prevented or alleviated if there wasn’t a lack of access to affordable care or numerous inefficiencies within the system. 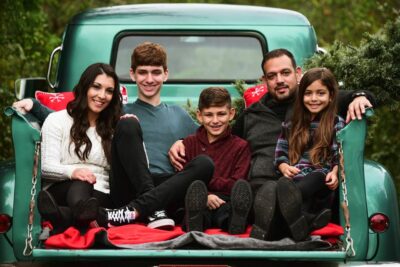 Omar Fuentes and his family

“After seeing the issues that my family and I had encountered firsthand, I really wanted to fix the healthcare system,” Fuentes said.

Working nights and weekends at first, Fuentes decided to start working full-time on his idea and committed to bootstrapping his startup with savings and back pay from the VA.

By learning to do most things himself — web development, marketing, video editing, and more — Fuentes managed to keep costs low and used only a small portion of his own capital to build the company’s infrastructure, allowing him to use the rest to support his family of five and take care of his mother.

“I just had to be as resourceful as possible and bet on myself,” he said. “The decision to go all-in on myself and the knowledge I have really helped lay the foundation for where I’m at today.”

Though he started out using his background to offer consulting services, COVID-19 accelerated his move towards a virtual platform where he found that acquiring funding for the development of accelEQ’s minimum viable product — the first iteration that can go to market and generate feedback — was the biggest challenge he faced.

Resistant to the idea of offering equity shares of his startup, Fuentes recalled his perspective changed when Maltais said to him: “Sometimes obstacles are placed before you specifically so that you can change directions.”

That advice, he said, “hit me like a ton of bricks,” causing him to immediately reach out to personal contacts. Within weeks, Fuentes brought on two co-founders to help him build the platform, citing it as the spark he needed to realize his vision and turn his idea into something tangible.

“Reaching out to Veterans Florida is a great start because they are connected everywhere. Having a good conversation with them about what resources are out there is going to be extremely imperative for you to be able to take the next step.”

By eliminating time-wasting tasks — such as group telehealth appointments, transcribing the doctor-patient interactions, automating reimbursement claims, and more — Fuentes said his platform allows doctors to spend more time with their patients and hopes to prevent the bureaucratic burnout that’s prevalent within the medical community.

Fuentes continued to expand his professional network and through a contact at the Pasco County Economic Development Center, he met retired U.S. Marine Corps Major Gen. James S. “Hammer” Hartsell, Executive Director of the Florida Department of Veterans’ Affairs (FDVA), who recommended reaching out to Veterans Florida for entrepreneurship resources.

Fuentes attended a CEO Mindset growth training cohort by JULO Strategy through the Veterans Florida Entrepreneurship Program and plans to take advantage of a coworking space with our partners at Embarc Collective in the near future.

And this past summer, he entered accelEQ into the Battle of the Pitches at the 2021 Veterans Florida Virtual Expo and competed against other veteran entrepreneurs, taking home 2nd place.

Fuentes recently used the pitch competition winnings to help fund a trip to Chicago to meet with venture capitalists as part of the PenFed Foundation Veteran Entrepreneur Investment Program, gaining interest from investors with one planning to invest between five and six figures in accelEQ. 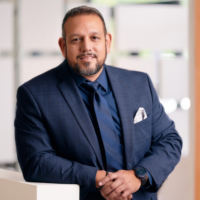 “Being able to obtain this investment will catapult us to the next level and allow us to immediately make a positive impact within healthcare,” Fuentes said following the meeting with investors. His long-term plans for accelEQ include improving the company’s quality of service, continuing to innovate within the healthcare industry, and providing veterans with career opportunities at his company.

“As veterans and to those serving in the military right now, the first thing we have to recognize is there’s something innate within us,” he said. “We made a choice most people would not or could not make: To serve a purpose much greater than ourselves.”

By honing the skills taught by the military, such as being resourceful and adapting to complete an objective, Fuentes said veterans can apply their experience to overcome any obstacle and gain an edge on the competition in the business world.

“In the military, they break you down so they can build you right back up,” Fuentes said. “That goes a long way because once you go into entrepreneurship, it’s going to break you down and you won’t have the structure or support system that the military provides; but you’ll be able to lean on that experience and continue to press forward.”

For veterans considering entrepreneurship or who are looking to grow their existing veteran-owned business, Fuentes recommends connecting with Veterans Florida and taking advantage of our numerous resources and networking opportunities.

“Reaching out to Veterans Florida is a great start because they are connected everywhere,” Fuentes said. “Having a good conversation with them about what resources are out there is going to be extremely imperative for you to be able to take the next step.”

While he’s had opportunities to live in other states, Fuentes said he wouldn’t consider living anywhere else since Florida offers veterans unparalleled resources and benefits for starting and growing a business and goes out of its way to facilitate that development.

“I was always drawn back to Florida,” Fuentes said, adding that “the resources, low taxes, and benefits of starting a business in Florida are pretty significant; plus you have access to Veterans Florida and other organizations who are huge on trying to attract, retain, and grow talent right here.”

“The state is open, and it really has shown an incredible amount of vibrancy. As veterans, we’re constantly looking at freedom and to have the freedoms that we have in Florida is just tremendous to me.”

In addition to the weather, amenities, and perks the state offers, Fuentes said perhaps the biggest advantage Florida has over other states for veterans like himself is the freedom to enjoy life, take care of his family, and pursue his passion.

“The state is open, and it really has shown an incredible amount of vibrancy,” Fuentes said. “As veterans, we’re constantly looking at freedom and to have the freedoms that we have in Florida is just tremendous to me.”