Some Things Just Go Well Together — Like Great Beer and a Veteran Success Story.

Life’s full of choices—some are routine and easy to overlook, while others can be life-changing (remember trying to decide which branch of service you were going to join?) Our choices are our own and it’s the decisions we make that ultimately define us.

Great leaders are able to make hard choices every day. That’s a part of what makes them great. It’s one part process, and one part instinct (and usually a little charisma sprinkled in for good measure). So, it’s no surprise that when former US Navy pilot, Ron Gamble, set out to open a brewery he decided to call Florida home. 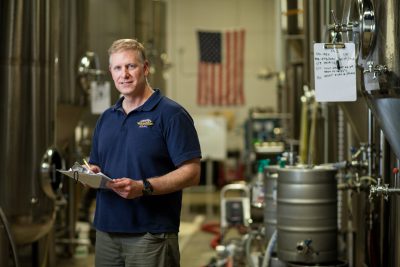 Ron had a lot of choices for where he could open his brewery. However, like any great leader, he weighed his options and decided that Florida, with its strong veteran community, great business climate and burgeoning craft brew scene was the perfect place to set-up shop. In 2013, he opened Veterans United Craft Brewery in Jacksonville, Florida. Since then he’s hired and trained dozens of veterans to carry out a simple mission—brewing some of the best beer in America.

Veterans Florida sat down with Ron to talk about why he chose Florida, how he defines success, and what opportunities he sees for veterans who are considering a move to the sunshine state.

VF: Hey Ron! Veterans United is a really awesome brewery. It’s interesting, you were a Navy Pilot—how’d you go from flying jets to creating craft brew?

Ron:  It all started back in ‘99 when my wife bought me a small home-brew kit. That’s really what ignited the passion. In 2007, I went to brewing school and then began working my way up through the ranks at several breweries in the New England area.

“I wanted to hire veterans, that’s huge for me. More than 80% of my employees are veterans and I really believe veterans make some of the best employees.”

VF: Wow, so you went from landing on flight decks to serving up beer flights. How’d you turn your military experience into a successful brewery?

Ron: After my time in the Navy I spent many years as an entrepreneur. In fact, I started up six different software and internet companies. But it was always my military training that I turned to, to help make me and my team successful—those leadership tools I had learned while in the Navy.

VF: Leadership is something a lot of veterans understand, and something every community really looks for and embraces. What’s that military community like here in the state of Florida?

VF: Was that strong military community part of the reason you chose Florida as the location to open Veterans United?

Ron: It absolutely was. It was also just all the opportunity that exists here in Florida, especially for business and entrepreneurs. I was brought up in New England, which is probably among the top four original areas for craft beer. Florida is relatively new to the scene, so I saw that as a great opportunity to start a business. Plus, I really love the state of Florida, I love the people, the climate, everything about it. I was also ready to get away from all the snow and cold weather in Massachusetts.

VF: The weather really is pretty amazing in Florida. Talk a little more about your military experience and how that’s influenced everything you’re doing here at Veterans United.

Ron: Every generation of my family has served in the military as far back as the Spanish American War, which my great-grandfather served in. My grandfather was in World War One, my father served after World War Two, and my brother was an Air Force pilot. It’s kind of a tradition in my family to enter military service.

For me, that military experience influences everything—right down to the teamwork and project management aspects required to run a business. As veterans, we learn a lot of skills in the military; but the ability to adapt and overcome so many of life’s obstacles, while also finding new ways to push what we do every day is what really drives our story here at Veterans United.

Ron: I could have built this brewery anywhere in the 50 states. We looked at North Carolina, we had lived there before, but ultimately, we decided to come back here to Florida. The state has a really great environment for veterans, it’s very pro-military, and given that my brewery is called Veterans United Craft Brewery, I wanted to hire veterans, that’s huge for me. More than 80% of my employees are veterans and I really believe veterans make some of the best employees.

Not only that, there’s a huge veteran population in Florida, a really great network to tap into. From my experience, veterans are mature, they’ve been given a lot of responsibility at a young age—and most have succeeded. I’m trying to harness that education and training while providing an environment that they feel great about coming to work in every day.

VF: Florida really does love our veterans. What would you say is the best part of working so closely with veterans to create all of your beers?

Ron: When it comes to employees since so many are former military, there’s a shared experience. We’ve got guys from the Coast Guard, the Marines, the Army—but there’s always a sense of camaraderie. I think that’s the best part. It’s special and it’s something that you really don’t see in too many companies or corporations—let alone states.

VF: Thanks for your time Ron. Speaking of time, I think maybe it’s time we try a couple of these beers!

What Will You Achieve In Florida?

In life, sometimes it’s easy to overcomplicate the decision-making process. However, as veterans, we’re used to thinking fast and using our instinct and training to make sound decisions.

Florida is a great place for veterans, for several reasons (one of them being Ron’s fantastic craft beer). However, the best part about calling the sunshine state home is the support you’ll find from a strong and involved veteran community. And while there’s a lot of other states to choose from, the decision comes down to trusting your gut and following the trail which many of our veteran brothers and sisters have blazed before us by calling Florida home.