As Ryan McKibben prepares his crops and pollinator habitat for the coming winter, the former U.S. Army sergeant remembers the difficulty of transitioning back to civilian life after 10 years of military service and two combat tours in Iraq.

“I had struggled for years thinking that I had made a huge mistake leaving the Army,” he recounted. “I always felt like I was at least a decade behind my peers in my career goals.”

McKibben initially sought a career in Information technology (IT) and later worked at a Tallahassee law firm while earning his bachelor’s degree at Florida State University. However, he soon realized the 9-to-5 office environment was not for him.

He then came across a Facebook ad in 2018 for the Veterans Florida Agriculture Program — our partnership with the University of Florida Institute of Food and Agricultural Sciences (UF/IFAS) that offers veterans hands-on experience and helps them transition into careers in Florida’s $149 billion agriculture industry.

Having experience with his own backyard garden and wanting to learn more about professional growing practices in hopes of one day running a full-scale farming operation, McKibben entered the agriculture program to pursue his budding passion.

“Farming is meaningful, purpose-driven work. I honestly feel like I am serving my fellow man again.”

As part of his paid fellowship at the UF/IFAS North Florida Research and Education Center in Quincy (NFREC), McKibben spent six months learning about the many facets of agriculture by working full-time alongside the program’s farm technicians. 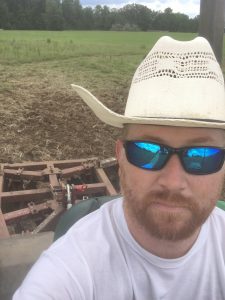 McKibben harrowing his Monticello farm in preparation for crimson clover.

“I was able to spend lots of time with the faculty at the NFREC, who took the time to put our hard work into perspective by explaining the experiments we were conducting and how it affects the industry,” he said.

From planting and harvesting crops such as oranges, peaches, tomatoes, broccoli, and tung trees to caring for and maintaining tractors and supply lines, McKibben received training that laid the foundation for owning his farm.

“The program gave me the opportunity to get a hands-on education while being able to support my family financially,” he said. “It’s the reason I am able to be a farmer and be a part of such a wonderful and fulfilling industry.”

While working at the UF/IFAS, McKibben received the Florida Department of Agriculture and Consumer Services’ (FDACS) May 2019 Veteran of the Month award from Commissioner Nikki Fried for his service, community leadership, and passion for Florida agriculture.

Today, the now 38-year-old veteran owns and operates McKibben Farms with eight acres in two cities and combines his love of farming with beekeeping — a practice McKibben began after his wife’s grandfather invited him to harvest honey.

In his hometown of Tallahassee, the focus is on three of the four McKibben Honey apiaries, chickens to produce eggs, and a garden to feed his family. Next year he’ll grow beans, corn, watermelons, and tomatoes in Monticello along with the clover and wildflowers already planted for his roughly 100,000 bees.

McKibben said he’ll continue nursing his nearly 30 citrus trees over the next couple of years and wants to add blueberries and blackberries to his crop rotation soon. Plans also include shifting toward organic farming and moving his agribusiness away from using artificial agents. 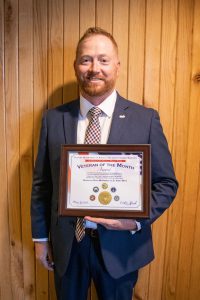 McKibben with his FDACS Veteran of the Month award.

“I am transitioning to a sustainable agriculture model where there will be almost no need for chemical fertilizers or pesticides,” he said. “This will include chickens raised on the pasture, organic vegetables, and livestock grazing in between the fruit trees and bushes.”

Outside of managing his farms and apiaries, McKibben said his experience with Veterans Florida was vital to landing a position as an energy policy analyst at FDACS, where he focuses on water, solar, and carbon policies that not only protect the environment but also help farmers.

Even though he struggled early on during the transition back to civilian life, McKibben has never been more confident in his future agricultural pursuits, and the support of those around him serves as a constant reminder of just how far he’s come.

“I’m in a job I always wanted and am farming as much as I can,” he said. “I get feedback from my friends all the time about how they wish they could be doing the things I do.”

McKibben also has some advice for veterans interested in starting a career in agriculture but might be sitting on the fence: “Do it. Farming is meaningful, purpose-driven work. I honestly feel like I am serving my fellow man again. Veterans and farming are a natural fit. There’s machinery to maintain and tight deadlines to meet and the end result is a huge payoff with a sense of purpose and pride.”

To put veterans on the path toward success, McKibben strongly recommends enrolling in the Veterans Florida Agriculture Program because the training and resources it provided allowed him to jumpstart his agricultural pursuits and he’s confident it will do the same for aspiring veteran farmers.

“I would do it all over again if I could,” he said. “I hope the agriculture program continues for many, many years and that each veteran farmer it produces goes on to do better and better things.”

Click here to learn more about the Veterans Florida Agriculture Program and apply.