U.S. Army veteran Sara Ferrera’s love of the outdoors and getting her hands dirty stems from her upbringing in Arkansas. While spending much of her childhood exploring nature, she remembers how a nearby farm initially piqued her interest in agriculture.

“I always enjoyed watching farmers work the Earth to feed families,” Ferrera recalled. “I felt a connection to it.”

Ferrera enlisted in the Army in 2011 and served as an intelligence analyst at Fort Riley, Kansas, before transitioning to the Reserves and moving to Florida in 2015 where she continued analysis work as a contractor. Growing tired of the day-to-day grind of the office environment, Ferrera discovered a new career path when she learned about the Veterans Florida Agriculture Program one night while watching the evening news.

“My experience has been both fulfilling and eye-opening.”

“Fox 13 Tampa Bay had a segment about the agriculture program around Veteran’s Day last year,” she said. “My husband and I saw it and knew it was right up my alley.”

In partnership with the University of Florida Institute of Food and Agricultural Sciences (UF/IFAS), our agriculture program is a six-month paid fellowship designed to equip veterans with the knowledge and hands-on experience they need to thrive in Florida’s agriculture industry. 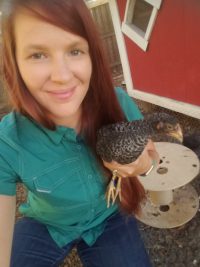 Ferrera with her chicken Randy at Floaty’s Farm.

In January 2020 she started working at the UF/IFAS Gulf Coast Research and Education Center (GCREC) in Wimauma to study a wide range of subjects within agriculture.

Beginning with weed science and its impact on crops, over the next few months, Ferrera learned how to identify nematodes and what signs to look for when determining whether a crop is infected with a disease. Following her graduation from the program in July, the veteran joined the GCREC Farm Crew and acquired additional skills, including how to operate farm machinery.

“My experience has been both fulfilling and eye-opening,” Ferrera said. “Before the internship, I did not know about nematodes, pathology, or the importance of weeds as I do now — I didn’t even know how to operate a tractor.”

Without the resources to purchase a large property, Ferrera turned to urban farming; a technique that encompasses growing and producing as much as possible within a small space, typically in a city or suburb.

Ferrera took their advice and founded Floaty’s Farm on about a half-acre in Brandon, FL earlier in Fall 2020. With a focus primarily on microgreens, like arugula, spinach, and kale, she has an ever-growing list of crops on offer and has even begun raising chickens.

“My urban farm concentrates on microgreens, with a few secondary options, including squash, sweet peas, tomatoes, and I am currently growing guava and papaya trees,” she said, adding: “I have five Barred Rock chickens, who have become family pets. We plan on using them to provide natural fertilizer and fresh eggs.”

As demand increased and the business grew, Ferrera enrolled in the Veterans Florida Entrepreneurship Program through Tampa Bay-based JULO Strategy. With their guidance, she’s developed a concrete financial strategy, hired an assistant to handle administrative tasks, and found new ways to grow and run her agribusiness more efficiently. 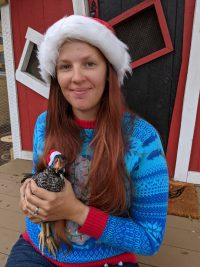 Ferrera and Randy in Christmas outfits outside the coop.

“I was overwhelmed just by the thought of being a business owner and only considered it being a one-person show,” said Ferrera, who recently completed the first stage of the CEO Mindset course and has begun the second, added the program “helped me see there can be more than just my backyard.”

In the near term, Ferrera said she would soon like to build a functioning hydroponics system to grow more produce in smaller areas. For the long haul, the veteran has more ambitious plans.

“My long-term goal is to have a 500-acre operation, splitting it between livestock and produce production,” she said. “The farm will function as a non-profit to help veterans as the program has helped me.”

For veterans interested in following in her footsteps and pursuing agriculture, Ferrera highly recommends reaching out to Amy Entress, the Veterans Florida Agriculture Program Manager.

“Contact Amy. She is a go-getter and will point you in the right direction before, during, and after the internship,” she said.

Poised to reap the benefits of following her passion, Ferrera said the most valuable part of her Veterans Florida experience is knowing every aspect of the entire process will lead to a lifelong endeavor.

“Everything I have learned has its place and value,” she said. “I want to take it into my future in the agriculture industry.”

Click here for more information on the Veterans Florida Agriculture Program and here for the Entrepreneurship Program.