“I’ve seen so many people struggle up this mountain,” he said of the transition period. “You’re not going to stay in the military forever. Everyone eventually leaves and you need to develop a plan at least two years out for what you’re going to do when that day comes.”

Spanning 32 years, Fishback transitioned out of the Army twice. His first exit came in the mid-90s when there were little to no civilian training programs in place for transitioning servicemembers, which he described as essentially “Do you want to join the National Guard and be a pilot?” with an added “have a nice day” if you declined.

Stationed in Pensacola, Florida with three years remaining in his 23-year military service, he began planning his second transition. Wanting to pursue a career in information technology, Fishback happened upon the only Hiring Our Heroes job transition seminar held during that time and learned about the DOD SkillBridge program. 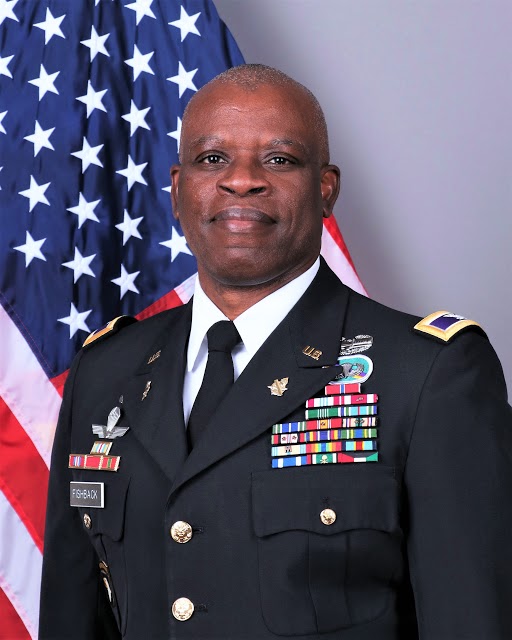 The U.S. Department of Defense established the SkillBridge program to provide active-duty personnel — of any rank and from all branches — the opportunity to gain hands-on civilian work experience through apprenticeships or internships during the last 6 months of their military service if they receive commander approval.

SkillBridge participants continue receiving their military compensation and benefits during the training period and have a high probability of post-service employment either with the initial provider or other employers in an industry-related field.

Because there were no SkillBridge opportunities in his field in Florida, Fishback had to go to Georgia to find IT fellowship partners; one of which was IBM, and after four interviews within four different departments at their Atlanta office, Fishback received the “yes” he’d been looking for.

“I knew that I needed to have applicable skills after retiring from the Army,” he said. “A 12-week corporate fellowship was a perfect way to do that.”

Over the next three months, Fishback gained hands-on experience as a Program Manager leading a cross-functional development team in IBM’s Watson division. Tasked with working on and delivering the company’s question-answering artificial intelligence to businesses around the country, the retired Army colonel was given the chance to combine his leadership experience from the military with on-the-job civilian technical skills.

“Your credentials do matter,” he said, emphasizing that military experience will only get you so far with employers. “In the military I would say ‘I led this many soldiers as colonel’ and that would be enough. But an interviewer will say to me ‘Great! That’s point one — you need 100 more points.’”

Even though IBM guaranteed him an interview once he completed the internship, Fishback would soon receive a phone call from Amazon Web Services — the market leader in cloud computing. Having previously submitted a resume for a lower position, AWS now wanted Fishback to interview for a higher role of Engagement Manager after seeing he’d obtained industry-related experience through SkillBridge.

“Put yourself in a position to win,” Fishback said, adding that transitioning servicemembers need to structure their calendars for civilian training to get ahead. “Break up the cycle of military stuff,” he says. “If you don’t, you’re like everyone else who walks through their door.”

Three interviews later and AWS offered him the job. Fishback accepted the full-time position with the added benefit of working remotely during the COVID-19 pandemic, allowing him to stay in Pensacola which he said, “has the added bonus of helping to contribute to the growth of the community.”

“The program is a great way to help servicemembers transition both personally and professionally … SkillBridge is a stepping stone to where you want to go.”

Nearly a year into his job, Fishback accepted an additional duty of Director of Veteran Recruiting within his division at AWS “to bring more veterans on board because Amazon realizes the long-term value.”

“The math has been proven: When you have veterans on the staff, the company performs better,” said Fishback, citing LinkedIn and ZipRecruiter/Call of Duty Endowment studies and adding that the increased productivity and improved team morale fosters positive results across the board and “creates a different mindset and work ethic that gets embedded in the entire staff.”

Derrick Fishback outside the IBM Atlanta office while in the Hiring Our Heroes Corporate Fellowship Program.

A Lack of Awareness

Fishback’s success didn’t come without hurdles. Aside from seeking an out-of-state employer, he recalled that most at the leadership level didn’t know about SkillBridge and some even told him the “program is not meant for you, just for younger people.”

“The goal should not be to discourage participation, but to inform the servicemember of the benefit and encourage them to apply,” he added.

Educating both commanders and employers on SkillBridge is critical to ensuring servicemembers can take advantage of the program. To meet this challenge head-on, two bills filed in the Florida Legislature aim to solve these shortcomings.

A Solution In Sight

The bills designate Veterans Florida as the state’s primary SkillBridge assistance organization tasked with promoting the program, connecting servicemembers with employers, as well as assisting employers in developing a training curriculum for DOD approval.

Currently, few states have statewide SkillBridge initiatives, but Florida is in an unprecedented position with more than 16,000 of the nearly 200,000 transitioning servicemembers exiting from Florida’s 21 military bases each year, joining the more than 1.5 million veterans residing and working in the state.

Florida not only has the opportunity to be among the first states to join the list of statewide SkillBridge initiatives, but the bill’s passage in the Florida Legislature would pave the way for the most impactful implementation of SkillBridge to date.

Fishback supports Florida creating a statewide SkillBridge initiative and sees it as an all-around benefit to servicemembers, businesses, and the state. He added that he couldn’t have achieved the level of career success in such a short time without going through the SkillBridge program and knows the program’s increased visibility will allow more servicemembers to get their foot in the door.

“The program is a great way to help servicemembers transition both personally and professionally,” Fishback said, adding that ultimately “SkillBridge is a stepping stone to where you want to go.”