Retired U.S. Army Reserve 1st Lieutenant Troy Underwood didn’t know much about steel and metal fabrication when he acquired Tampa Steel & Supply (TSS), but that didn’t stop him from reviving the flatlining steel business and turning it into one that Business Observer named among 2020’s Top 500 Companies on the Gulf Coast.

Raised by a military family, Underwood assumed he’d pursue a career in the military or practice law when choosing to major in history at the University of Florida, which he attended on a ROTC scholarship.

His first foray into the building materials industry came from working part-time at a hardware store while earning his bachelor’s degree. As graduation neared, he attended a UF career fair and was given an offer to go through a management training program in the paint manufacturing industry. 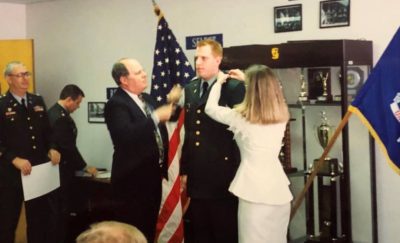 “They liked my leadership experience from the military and my paint knowledge from working at the hardware store,” he said. “They made me an offer that was very appealing.”

After accepting the offer, Underwood also began his obligation to the Army Reserve, where he served as a Transportation Officer for nearly 10 years before his retirement in 2001. During and after his military service, he amassed almost a quarter-century of managerial experience across various building material businesses in Tampa Bay and Atlanta.

Underwood knew the former owner of TSS before accepting a position with a stoneworks company outside of Atlanta in the late 2000s, and the two discussed the possibility of Underwood managing or purchasing the steel business. But with an uncertain economic outlook at the time, Underwood passed on acquiring the business.

“Given that the economy was in the middle of a downturn at the time and that I didn’t know much about the industry, I decided to stick with what I felt was a more secure fit,” he said.

The Army veteran said he’d begun honing his entrepreneurial skills during the six years as Vice President with the stoneworks company but became increasingly frustrated with the inefficiencies commonly found within corporate environments.

“I was very fortunate to test drive the company for a couple of years, learn the business, and see where my experience could create a dramatic improvement.”

“I worked in the corporate world and it was frustrating when I knew I could get something fixed but had to go up the rungs only for the solution to get watered down — if it got implemented at all,” said Underwood, thinking that “maybe it’s time to own my own business.”

Wanting to move back to Tampa Bay, Underwood began seeking entrepreneurship opportunities beyond starting a business in Florida. Rather than start from scratch, he opted instead to use capital from savings to purchase an existing business.

He reached back out to the former TSS owner, who was looking to sell the company since sales growth had fallen off following the subprime mortgage housing crisis, and the two reached an agreement where Underwood would run TSS as president for a couple of years with an option to acquire the business.

“At first I was gun shy of the building materials industry. I didn’t want to put all my eggs in one business so I started with a lease-to-own agreement to mitigate the risk,” he said. “I was very fortunate to test drive the company for a couple of years, learn the business, and see where my experience could create a dramatic improvement.”

Starting in 2014, Underwood’s leadership made an immediate impact with TSS experiencing double-digit percentage revenue growth over the next few years. Decisions to organize and leverage TSS’s existing customer database and improve its print and online marketing efforts paid off immediately.

After Underwood received approval for loan financing through the Small Business Administration (SBA), he took over as the TSS owner on Jan. 2, 2019 and immediately faced challenges.

Predicting revenue would be impacted by new tariffs on imported steel, he sought state resources and registered for a Florida veteran-owned business certification — a decision that led him to discover the Veterans Florida Entrepreneurship Program.

“I thought the Entrepreneurship Program would be a great way to learn how to grow my business and face new challenges,” said Underwood, who began attending startup and growth classes with our partners at Action Zone in Oct. 2019.

But Underwood didn’t participate alone. His wife, Kristina, who manages every department within TSS, joined him so they both benefit from the classes. All veteran and military spouses are eligible to participate alongside their significant other in the Veterans Florida Entrepreneurship Program.

Underwood said he learned multiple ways to improve TSS from the discussions on value propositions, planning budgets, and how to take advantage of new resources. But the biggest impact came from think tank sessions where participants would break out into groups and explore ways to create new avenues of revenue and give each other feedback on ideas.

One idea that Underwood pitched was creating and selling metal art from a plasma metal cutting machine he’d recently purchased. What initially started as a small side hustle to sell military art to local veterans became Urban Metals — a division within TSS that creates customer-designed metal art.

“Metal art was a big one for us,” Underwood said. “The course enables you to share ideas and get input from different people with different views.”

“Veterans, like Troy, make great business owners because they possess an entrepreneurial mindset and skills they often don’t realize are transferable to business development,” said Action Zone Co-Founder & Executive Director Rosie Lee. “They were trained in the military to work collaboratively, to evaluate and mitigate risks while calculating

the success of the mission, and to see obstacles as challenges to overcome. All of these help a startup business succeed and thrive.”

After graduating from the program, Underwood was prepared to overcome the next hurdle: COVID-19. In addition to focusing more on metal art to make up for the slowdown in production from steel mills, he also ramped up TSS’s website and social media presence to cater to customers avoiding in-person transactions.

The decisions paid off: TSS didn’t lay off any of its 19 employees and more than a year after the pandemic began, Underwood says the business is having its best months in revenue since before the tariff took effect.

With new steel mills opening in Central Florida, the future appears bright as Underwood stated he plans to double the TSS’s size by 2025 and double again by the end of the decade by continuing to expand the businesses’ diverse customer base, which already includes anyone from sole proprietorships to major clients, such as the City of Tampa, Amalie Arena — home of the NHL’s Tampa Bay Lightning — Amazon, and SpaceX.

Underwood said he believes Florida is a great state for veteran entrepreneurs to acquire or start a business and praised the state for supporting its businesses and how it worked to keep them from permanently closing their doors during the pandemic.

Troy and Kristina Underwood working together in their office at Tampa Steel & Supply.

“Florida has a strong economy and a very business-friendly environment,” Underwood said, adding that it’s great “the state recognizes areas where it needs to get stronger, like in manufacturing so it doesn’t rely so heavily on tourism.”

Underwood encourages veterans seeking to purchase or start a business to spend time in the company or industry, learn the inputs, and understand the opportunity. He also advises using all available resources, surrounding yourself with the right people, and pursuing ownership in an industry where you can discover your passion.

“Take advantage of all the resources out there, especially if you have no experience,” Underwood said. “Attending Action Zone’s courses through the Veterans Florida Entrepreneurship Program was tremendously beneficial.”

“At the end of the day, if you don’t have knowledge of the industry you’re in then you’ve got to find someone who knows it,” he said. “I’m fortunate to have an ad hoc list of advisors to rely on. Whether it’s hiring lawyers, financial advisors, or industry experts — you’re not going to know it all. Taking those steps makes the learning curve a little less steep and a little less expensive. I didn’t know everything about steel, but I hired people who did.”

Underwood says his passion for steel didn’t happen overnight but developed over time, adding that he’s proud of the culture he’s created within the company and is confident they’re prepared to weather any storm.

“Every day it’s either my wedding or my funeral,” Underwood said. “But that’s one of the drivers to running a business.”