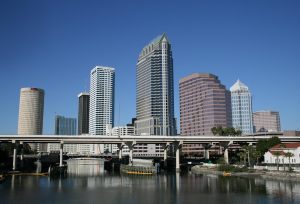 move and stay, and you’ll hear the same explanation over and over again: The state offered numerous job and educational options, a community that is extremely supportive of veterans, a warm climate and beautiful surroundings.

While each region in Florida possesses a distinctive set of characteristics, all areas share qualities that hold particular appeal for those leaving active duty and seeking to build a new life in the civilian sphere. As Chris Campbell, a former U.S. Marine who is now a senior at the Ringling College of Art & Design in Sarasota, FL, says: “There are so many opportunities here—it’s just a matter of going out and taking advantage of them.”

“The veterans and active duty military community here is huge, and it’s supported by a very comprehensive infrastructure,” says Dave Glassman, a former helicopter pilot for the U.S. Marine Corps and co-owner of the Pensacola-based software development firm DigiPro Media. “On any given day, you can go anywhere and be surrounded by veterans in the work force. They are the leaders, the teachers and the coaches. They’re everywhere in the community and their attitudes and attributes permeate it. As a result, there’s a high level of acceptance and benevolence towards veterans here as opposed to other places in the nation where the veteran population and infrastructure is more limited.”

Ron Gamble, a veteran of the Navy and co-owner of Jacksonville-based brewery, Veterans United Craft Brewery, adds: “What’s really unique about having so many veterans around is that you get to learn from them. You’re almost reinventing the wheel if you go to a new place and there’s not a very strong veteran community. You’re out there on your own and you’re learning firsthand. But if you come to Florida, where you’ve got so many folks like myself who have already gone through transition, they can mentor you and help you get through the initial hurdles one faces after service.”

For Gamble, it’s very exciting to help service persons transition, see them apply themselves to a new profession and succeed. “And that’s true of so many in the community,” he says. “Once a service person, always a service person, so we’re going to go that extra mile to help you out.”

About 80% of the brewery’s employees are veterans and, says Gamble, “it’s all about giving back to the community.” His approach is typical of Florida-based business owners who are veterans—they tend to apply their passion for service to their new civilian enterprise.

Not only does Florida have a large number of top-rated state universities and colleges, but many have on-campus offices and centers dedicated specifically to the well-being and academic success of veteran students—services include helping them put GI Bill benefits to use and access available scholarships. No matter where a veteran comes from, when attending school in Florida, the tuition is the in-state rate, which saves two-thirds of the cost that a non-veteran from another state would pay.

The University of West Florida in Pensacola is but one example of the kind of high-level veteran-friendliness and support that transitioning students encounter at higher education institutions throughout Florida. Says Jeff Meister, a veteran of the U.S. Navy working at the University of West Florida Military & Veterans Resource Center: “We’re one of only 90 college-level schools in the country that have a vet success campus coordinator—that’s a VA individual. We positioned the center to be a one-stop shop for veterans returning to school. When you come back from being in the military it can be difficult to navigate the waters of academia and we decided we wanted to remove all the barriers to success by having one place for a veteran to go.”

Chris Campbell has found that Florida, the Ringling College of Art & Design and its Sarasota surroundings are an incredible boon to those with artistic inclinations and talents. “Florida is a really great place from a creative standpoint,” he says. “I was coming from California and though it’s pretty hard to top what it offers, I discovered that South Florida offers a lot of the same things. You have Art Basel and a vibrant art and design culture in Miami, and Sarasota also has a huge art culture. There are so many options for starting fresh here.”

“If you’re transitioning out of the military, I think it’s important that you, first of all consider Florida, and second, look at it as a land of real opportunity.” — Chris Campbell, veteran of the U.S. Marine Corps and a student at Ringling College of Art & Design

3. A strong economy with many job opportunities and employers who appreciate and hire veterans

The business climate in Florida is extremely robust and there are presently thousands of job openings in the state, across a large variety of industries. Many of these openings are related to skill sets that veterans develop during their military service. With its unique Career Portal, Veterans Florida makes it easy for veterans to search for openings, match their skills to available positions and develop resumes for civilian jobs.

Dave Glassman highlights the many opportunities available to veterans in northeast Florida: “Veterans can apply skills they gained in the military to any number of industries, whether it be banking or manufacturing or aviation. If they were to go elsewhere, there wouldn’t be so many types of industries available to them.”

“Aeuronatics is a big industry here,” says Brian Cherry, General Manager of Destin Jet, a full-service fixed base operator providing fuel, storage, ground handling and other services for general aviation aircraft in Destin, Florida. “A number of jobs are tied to aviation—it’s a big driving force in Okaloosa County and statewide, and it’s a great field for veterans because many have worked in and around aircraft in the military.”

“Veterans represent a great opportunity for a technology company like DigiPro Media,” Glassman adds. “We’re constantly upgrading and improving the technology so as to be able to expand the services that we provide our clients. And veterans come to the company ready to go, ready to be responsive, flexible and achievement-oriented.

Florida companies deeply value the attributes that veterans bring to the table and the Veterans Florida Business Development Training Grant helps employers defray the costs of training the veterans they hire. “I look at it as a win, win, win,” says Glassman. “It’s a win for the employee—a veteran who has served his or her country, a win for the company because it helps on a financial level, and perhaps most important, a win for the whole community because it benefits from having more veterans come here, given the attributes they bring.”

Companies like DigiPro and the kind of innovative technology development it sparks are taking root across the state. “Veterans don’t need to consider moving to Silicon Valley where the cost of living is quite high to get into the tech space,” says Bill Cody, a U.S. Army veteran working for DigiPro. “They can come here and thrive.”

Nearly one in four active duty service members and veterans want to open and operate their own business and Florida is an ideal state to in which to do so because of the substantial support it offers entrepreneurial enterprises.

Highlighting the prevalence of active business incubators in Florida cities, Dr. Sandra Kauanui of Florida Gulf Coast University says: “We have a number of incubators and accelerator programs in Naples and Fort Myers and there’s a tremendous amount of community interest in entrepreneurship.” Florida Gulf Coast University is one of seven institutions of higher learning across the state participating in the Veterans Florida Entrepreneurship Program, a free two-phase program that instructs veterans in business principles and practices, and provides post-instruction mentoring and access to local resources.

“Southwest Florida is full of high-tech companies and software companies like ourselves,” Edward Dort, a U.S. Army veteran and principal of Directional Command, Inc. in Naples. “There are numerous incentives for coming up with a business plan to create quality jobs for the area. And I’m just amazed at the number of veterans, especially retired veterans including admirals or generals who are down here and willing to help and lend their resources to ensure you’re successful.”

Florida is called The Sunshine State for good reason—it boasts a warm and sunny climate. 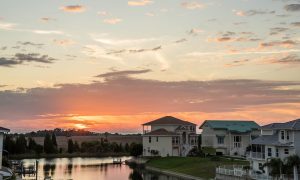 And its lush forests and parks, gorgeous beaches and waterways ranging from rivers and lakes to the Gulf of Mexico and the Atlantic afford unrivalled fishing, hunting and watersports.

In addition, the state does not collect a personal income tax, which greatly enhances the residents’ spending power. And housing is also quite affordable. The cost of living in many communities across the state is lower than the national average.

Scott Neil, who served as a Green Beret in the U.S. Army and co-founded the American Freedom Distillery in St. Petersburg underscores the distinctive lifestyle appeal of Florida’s various regions: “In Daytona, you have the original beach and wave scene and the Daytona 500. Then there’s Orlando, which is built around the theme parks and has some of the best restaurants in the world. And within 90 minutes, you can get to the Tampa Bay area, which has the Gulf and some of the best sports fishing you’ve ever seen, and in St. Petersburg, a vibrant arts scene. Each area is really totally unique and alluring in its own way.”