U.S. Navy and Air Force veteran Seth Hickerson’s worked with military special operations, athletes, doctors, and law enforcement and accumulated years of experience developing strategic ways to recognize stress and improve their performance — and after starting his business and moving to Florida, he took advantage of state’s veteran resources to take his company, My Steady Mind, to the next level.

Even though he was a highly-touted, three-sport high school athlete in Southern Indiana, he decided to join the military and Hickerson enlisted with the Navy; first stationed in Japan before joining the Seabees in Spain, Guam, and Southern California.

Hickerson said joining the Navy laid the foundation for his future success in the mental health field; from the military teaching him how to “overcome and embrace the suck” of day-to-day life to his experience stationed in Tokyo opening his eyes to how we can better train ourselves mentally by practicing mindfulness and meditation.

“The experience that really made me start looking more into mental health came when I left Tokyo for a couple weeks, and the first thing I noticed when I came home was how irritated and agitated everybody was,” Hickerson said, recognizing the mental wellness disparity between the heavily populated Tokyo and his small hometown of Bedford. “There’s 14 million in Tokyo, but it’s very peaceful, serene, and orderly. There’s 30,000 people in my hometown and everybody feels wound up.”

Upon returning to Tokyo, Hickerson said he began “learning more about the temples, meditation, and practices they use for mindfulness and emotional intelligence and started trying out all the different things that they do to help them manage their mental health.”

After transitioning out of the Navy, Hickerson pursued a bachelor’s in Health and Physical Education before joining the Air Force Reserve in graduate school, where he went on to earn a master’s in Sport Psychology and a doctorate in Educational Leadership. 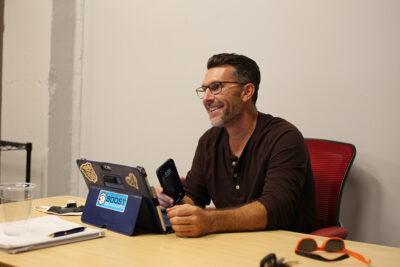 While working with athletes as the director of student fitness and health at the University of Richmond, Hickerson recalled first considering entrepreneurship when his friend, Army veteran and entrepreneur Fred Bryant, encouraged him to go into business. Initially hesitant and not knowing where to begin, Bryant returned with a business plan and laid out the steps he needed to take to get it off the ground.

“He helped coach me up, gave me that nudge, and showed me how I could turn what I do into a business,” Hickerson said.

Following a move to Manhattan then Oklahoma City and reconnecting with Bryant, who’d returned home from his deployment, Hickerson used money from a house sale to bootstrap his first startup, Boost Mental Toughness & Leadership.

“I had all these experiences and credentials and a background in high-level mental skills training, and I knew that it was a skill set that more people needed,” Hickerson said. “I set out to start a business to bring that to the masses.”

“What gives veterans an edge is they’re disciplined, know teamwork, are task-oriented and have communication skills that are second-to-none. But I think one of the most important things is that you can depend on them in a world where a lot of people aren’t very dependable these days.”

Even though Boost proved successful, Hickerson saw that it could be even better; which became evident at the start of the pandemic and after relocating to Melbourne, Florida. Predicting that there’d be a growing need for mental health training, Hickerson decided to “rebuild and reload” and relaunched the company as My Steady Mind to bring his skill set to more people.

“When the pandemic hit we knew mental health was going to go from bad to worse in our country,” he said. “Boost was the first company; it was good, but not great. We wanted to make sure we had a great product and service that would meet the needs of our primary markets: healthcare and law enforcement.”

Hickerson continued: “We updated and rebuilt everything: The course, the learning management system, and the delivery — everything went from JV to Olympic-level quality. We knew people’s minds were going to be very unsteady, so My Steady Mind was born to help people deal with the stress and exhaustion they are living with.”

My Steady Mind is a 9-module online course with live expert coaching designed to reduce stress and improve performance through mindfulness and mental resilience, enabling program participants to perform better in even the most chaotic of environments.

Along with raising awareness about the need for mental health and putting an end to decades-long stigmas surrounding the practice, Hickerson said My Steady Mind’s mission is to bring the training to people who’ve never had access to legitimate, comprehensive mental health training.

“20% of our population has a mental illness or a diagnosable mental illness and those people need treatment. The other 80% needs mental health training, which is what I do,” Hickerson said, citing statistics from the National Institute of Mental Health’s annual report. “Mental health is stigmatic because people don’t know what it is in our society; they hear the word ‘mental health’ and they think ‘mental illness’ and they’re not the same. That’s the big disconnect, and we as a society don’t do anything or talk about mental health training. We try to shove everyone into the treatment model — that’s why it’s stigmatic.”

Hickerson continued: “What we do is performance-based mental health training to help improve your performance whether you’re Navy SEAL, an athlete, a CEO, or a stay-at-home mom. That’s what most people need and want; they’ve just never had access to it before.”

While working with Groundswell Startups, he connected with COO Jarin Eisenberg, who got him a coworking space through its partnership with the Veterans Florida Entrepreneurship Program and encouraged him to enter My Steady Mind into the Battle of the Pitches at the 2021 Veterans Florida Virtual Expo.

“I’m always interested in doing anything with the veteran community; I love to support it and be around it,” Hickerson said. “When I saw it was a veteran event, I thought ‘Alright: Let’s give it a shot.’”

Hickerson practiced his pitch and with the help of Brian Brazda, his company’s COO, to nail down the presentation, My Steady Mind went on to take first place at the 2021 Battle of the Pitches.

“We just wanted to make sure we hit all the checkboxes of what they were looking for and then tell our story in a way that would resonate,” Hickerson said.

Hickerson used the pitch competition winnings to upgrade the My Steady Mind’s online platform and spent the rest on strategic marketing, which he said will be a primary focus for the company as it continues to grow.

“We’re in the growth stage, so our goal for next year is to either raise money or get a loan to really focus on marketing and PR and raise awareness to let people know we’re open for business,” Hickerson said, adding that in the long run, he’d “like to see the My Steady Mind curriculum in every high school and college in the country as a course that they can take.

“That would mean we are providing legitimate mental health training and awareness to the masses,” he added.

“Florida is very veteran-friendly. The VA system here is wonderful and having good access to facilities is a big plus. One of the biggest things is that there’s just a lot of veterans here; that veteran-to-veteran brotherhood is something that’s important to us.”

Seth Hickerson with the My Steady Mind team

For veterans considering the entrepreneurship route, Hickerson said he strongly believes veterans’ training from their time in the military gives them an edge in the marketplace of ideas and recommends they seek out the numerous resources Florida offers.

“I’m a big advocate for encouraging veterans to start a business,” Hickerson said. “What gives veterans an edge is they’re disciplined, know teamwork, are task-oriented and have communication skills that are second-to-none. But I think one of the most important things is that you can depend on them in a world where a lot of people aren’t very dependable these days.”

Hickerson continued: “If you’ve got that itch, I would say ‘go do it’ but first explore all the benefits you have as a veteran to start a business. Whether it’s through organizations like Veterans Florida or Groundswell or researching funding and loan opportunities with the Small Business Administration, veterans have a ton of resources out there that most people don’t have.”

“We’ve got a competitive advantage, so don’t be afraid to start your business,” he added.

As a veteran who’s worked and ran a business in other states, Hickerson said he sees Florida as an unmatched destination for veterans and their families.

“Florida is by far a better state for veterans,” he said, adding that there are “significantly more resources and opportunities down here.”

“Florida is very veteran-friendly,” Hickerson said. “The VA system here is wonderful and having good access to facilities is a big plus. One of the biggest things is that there’s just a lot of veterans here; that veteran-to-veteran brotherhood is something that’s important to us.”

And as for his decision to take a risk and start his own business, Hickerson said he’s glad he took the chance and hopes to see more veterans have the opportunity to pursue their passion.

“I love it,” Hickerson said. “I don’t know if I could ever do anything else other than be an entrepreneur.”