Former U.S. Army Specialist Matthew Hall needed to get his foot in the door to pursue a passion for law enforcement and enrolled in the Veterans Florida, Florida Highway Patrol (FHP) SkillBridge internship — successfully easing his transition back to civilian life and putting him one step closer to achieving his career goal of becoming a state trooper.

Born and raised in Panama City, FL, Hall recalled how the get-togethers throughout his childhood with one of his father’s best friends, a former K-9 officer at the Bay County Sheriff’s Office, initially piqued his interest in law enforcement and police dogs. Additionally, seeing the harmful impact drugs had on the community during Spring Break strengthened his desire to turn a growing passion into a career.

“I’ve just always had something in me that was a passion for law enforcement,” he said. “Seeing the amount of destruction drugs and things like that caused where I grew up, and the effects it can have on friends and families; they get caught up in it because of how prevalent it was in that area.”

“I want to help clean it up and keep it off the streets,” Hall added. “That’s something near and dear to me.”

Hall said he had a calling to join the military and enlisted with the Army in 2017. While serving as a combat medic stationed at Fort Stewart and then at Hunter Army Airfield in Georgia, he also attended Georgia Southern University and took an interest in investigating human trafficking upon reading In the Name of the Children by retired FBI Special Agent Jeffrey L. Rinek. 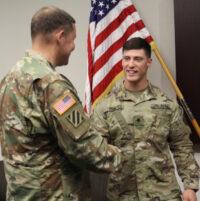 “It was one of those things that hit deep,” Hall said. “I wanted to know if I could make an impact like that; to stop predators and bring families back together or at least bring justice to somebody who wronged them and make a difference.”

Hall graduated with a bachelor’s degree in Criminal Justice and Criminology around the time he began planning his transition back to civilian life to pursue a law enforcement career and spend more time with his family. Though he was considering several states, he’d soon find an opportunity that no state came close to offering and let him return to Florida.

During the Army’s Transition Assistance Program (TAP), a Navy veteran came and spoke to Hall and other transitioning servicemembers about DOD SkillBridge — a program enabling active-duty servicemembers with commander approval to gain work experience with employers within six months of separating or retiring from the military while also maintaining DOD salary and benefits during the training period.

Veterans Florida partnered with FHP in March 2021, creating the nation’s first statewide law enforcement SkillBridge training for separating and retiring servicemembers, where the mission is to place participants in sworn and non-sworn positions at FHP upon completion of their military service.

Stationed in Georgia and looking at postings from other states, Hall came across the Veterans Florida listing for FHP’s Region Field Officer internship on the DOD SkillBridge website. Upon learning the opportunity provided a path to becoming a state trooper and favoring the benefits of living in Florida, the decision to return home to the Sunshine State was an easy one to make.

“I was able to train, learn, and take all of my courses that I needed so after I went back to complete out-processing with the Army, I was literally able to start a full-time job two days later.”

After getting accepted into the program in August, Hall moved to Jacksonville and spent the next 14 weeks training on-the-job as a dispatcher at the FHP Jacksonville Regional Communications Center (JRCC). His internship included hands-on training for dispatcher consoles and learning all of the 10-codes and signals required to efficiently communicate through the radio in addition to gaining a better understanding of state and federal laws. 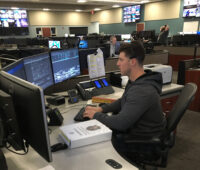 Matthew Hall working as a dispatcher for FHP JRCC

“I have a bachelor’s degree in criminal justice, but I didn’t understand the lingo or how law enforcement actually works,” Hall said. “A college degree doesn’t necessarily mean that you know how to become a cop or know how cops operate.”

With an eye towards becoming a sworn officer, Hall also participated in a ride-along and received guidance and valuable insight about the position from troopers. And seeing how troopers have to tune out the background noise while working in the field and relay back to JRCC was an eye-opening experience.

“It’s two different worlds in a sense, and unless you’ve seen both sides of it you don’t really understand what the other person is dealing with,” Hall said, adding that both troopers and dispatchers could greatly benefit from seeing the pressures from the other side and believes his time as a dispatcher better prepare him to become a state trooper.

Hall completed his SkillBridge internship in November and FHP immediately offered him the full-time dispatcher position at JRCC. Potentially getting a job offer upon completion and having a clear path toward becoming a state trooper were the deciding factors for Hall when choosing the FHP SkillBridge internship over other law enforcement opportunities during his transition.

“The biggest thing for me was the attentiveness from everyone at Veterans Florida and FHP. [Both] working synergistically provided a good overall experience throughout the whole process.”

“To go through the SkillBridge program and come out with a guaranteed job and income with a state agency that is willing to work with you and help you become a state trooper; for me, the decision was a no-brainer,” Hall said, adding that through the FHP internship “I was able to train, learn, and take all of my courses that I needed so after I went back to complete out-processing with the Army, I was literally able to start a full-time job two days later.”

Colonel Gene S. Spaulding, Director of the Florida Highway Patrol, sees a bright future for other servicemembers easing their transition with careers in law enforcement, a natural fit for many veterans.

“The Florida Highway Patrol applauds Matthew Hall for being the first member to complete the FHP SkillBridge program – the nation’s first statewide law enforcement SkillBridge program,” Col. Spaulding said. “By continuing our great partnership with Veterans Florida, I am certain there will be many more success stories like Matthew’s. These members served our country honorably, and will be a valuable asset to Florida’s workforce.”

Hall said he’s using the opportunity as a stepping stone to apply to the FHP Training Academy, where if accepted he’ll complete seven months of training to be sworn in as a state trooper. In addition, he’s currently in the process of joining the Army National Guard and applying as a Commissioned Officer Candidate, stating he wasn’t ready to completely let go and wanted to earn a commission.

Matthew Hall working from his dispatcher console at FHP JRCC

After graduating from the academy and working as a state trooper for a couple of years, Hall ultimately wants to move up to the FHP Criminal Interdiction Unit (CIU), a group of specially trained troopers designated as felony officers and canine handlers tasked with stopping drug and human trafficking on Florida’s interstate highways.

Outside of the training, Hall praised Veterans Florida and FHP for quickly responding to any request, making the program flexible to meet his timeline, and coordinating to get the training approved by his commander.

“The biggest thing for me was the attentiveness from everyone at Veterans Florida and FHP. [Both] working synergistically provided a good overall experience throughout the whole process,” Hall said. “A lot of time there were these stale moments where I was waiting to hear back from my chain of command, the CSP coordinators, or about signing off my paperwork, but it never failed that Andrea, Kolby, Major Gaston, or Laura would reach out to me to make sure that everything was good and to see if they could help out in any way to get the program approved and get it rolling.”

Hall highly recommends the FHP SkillBridge internship to any separating and retiring servicemember; whether to become a sworn or non-sworn officer or utilize and further develop military skills, such as becoming a pilot in the Aviation Unit, the state agency’s training provides a clear path into a law enforcement career.

“It’s a really good opportunity for any soldier wanting to go into law enforcement, especially if you’re not familiar with it at all,” Hall said. “I’m in a career field that I want to be in and it was a smooth transition for me — and I’m better prepared to go into the trooper academy.”