Few individuals know more about the F-16 Fighting Falcon than U.S. Air Force Technical Sergeant Ovidio Gonzalez. Having accumulated nearly two decades of experience maintaining one of the world’s most innovative military aircraft, he decided it was time for a new challenge and reached out to Veterans Florida to begin his transition and enroll in the Piper Aircraft SkillBridge internship to launch his post-service aviation career in Florida.

“After nearly twenty years in the military I just felt it was time for a change,” Gonzalez said of his decision to retire from the Air Force. “I was content with everything that I achieved up to that point, and honestly, I was just ready to try something new.”

A native of Palm Bay, FL, Gonzalez joined the military after positive discussions with a retired Air Force veteran visiting his junior college. Assigned as an F-16 aircraft mechanic at his first duty station at Spangdahlem Air Base in Germany, his nearly 20-year military service spanned over multiple countries in North America, Europe, and Asia; included deployments to Iraq and Afghanistan; and culminated in his final station at Shaw Air Force Base in South Carolina, where he first learned about the U.S. Department of Defense SkillBridge Program.

“Through multiple briefings and word-of-mouth from peers, I was introduced to the SkillBridge Program,” he said. “Where I was stationed, the commanders were good about relaying information and multiple opportunities to the members in the event that they were thinking of separating or retiring. Once I knew about it and went into TAPs, it opened the door to allow me to ask specific questions and get details on how exactly the program works.”

“As a fighter aircraft mechanic with almost twenty years on F-16’s, I was able to take everything that I’ve learned; whether it was the hands-on maintenance portion or overall supervisory portion and transition over to Piper.”

Gonzalez continued: “At first, I couldn’t believe it, and I thought there had to be some type of catch. Once it was explained to me and I understood how the SkillBridge Program worked, I thought it was amazing the Air Force would allow me the opportunity to do that.”

SkillBridge enables active-duty servicemembers with commander approval to gain work experience with employers within six months of separating or retiring from the military. SkillBridge participants maintain their DOD salary and benefits during the training period.

With his retirement date set for June 1, 2022, and a desire to return to Florida to be close to his family, Gonzalez began searching for aircraft mechanic opportunities on the SkillBridge website and discovered Veterans Florida, the state’s designated SkillBridge assistance organization, who connected him with the Senior Mechanic Supervisor internship with Piper Aircraft. 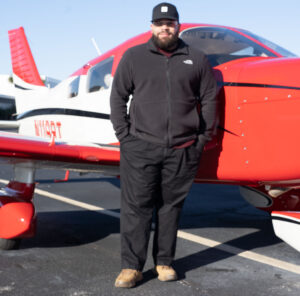 Piper Aircraft flew Gonzalez from South Carolina to its Vero Beach campus, and after taking a tour of the factory, he enrolled in the SkillBridge internship and started the training in December — giving him the opportunity to apply his skills from the Air Force to a new career pursuit and transition back home to Florida.

Gonzalez started his internship from his main area of expertise, the flight line, where he ran function tests, performed maintenance, and conducted final inspections on the company’s Cherokee and Malibu aircraft families to ensure certification by the Federal Aviation Administration leading up to the customer’s purchase.

“As a fighter aircraft mechanic with almost twenty years on F-16’s, I was able to take everything that I’ve learned; whether it was the hands-on maintenance portion or overall supervisory portion and transition over to Piper,” Gonzalez said. “It’s been pretty effortless and simple because I’ve done it for so long that it’s just a matter of getting accustomed to new guidance and technical data to perform tasks. A lot of the concepts are similar if not the same.”

From the flight line, Gonzalez’s training expanded to various departments, such as the construction of different plane components, within Piper Aircraft to allow him to become acclimated with all the inner workings of the aircraft manufacturer.

“They’re moving me around to different departments within the actual building facility to see the other side of how airplanes are built; things like structural build-up that I don’t normally see on a day-to-day or have experience with as a flight line mechanic,” Gonzalez said. “The construction and build-up are completely brand new to me. It’s given me the opportunity to become familiar with the overall functions of the company and learn how an aircraft is pretty much built from scratch.”

Navy veteran and Piper Aircraft Senior Director of Manufacturing Greg Wendel first learned about SkillBridge from a transitioning Marine and reached out to Veterans Florida VETS Services Director Jeremy Sinnemaki to implement internships at the company for transitioning servicemembers.

“The support that Jeremy provided was fantastic,” Wendel said. “He guided us through the entire process, answered all our questions, assisted with understanding the requirements, and introduced Piper Aircraft to the Veterans Florida support teams we’d be working with.”

Wendel said he designed the 4-6 month SkillBridge training to give servicemembers the full breadth of their entire operation, allowing them to gravitate to the senior aircraft mechanic and manufacturing supervision positions where they feel most comfortable in one or more of the company’s 32 departments.

Ultimately, Wendel said it’s Piper Aircraft’s mission to hire servicemembers who complete the internship and further develop their skills to ensure they have a long, rewarding career at the company.

“Our goal is to get candidates, like Ovidio, ready to enter our workforce and excel on day one,” Wendel said. “We want candidates to understand our company and culture as well as embrace our mission, then find a good fit within our team where they can launch a long career with Piper Aircraft. We have a need for high-performing technicians and mechanics as well as leaders, so regardless of the avenue they pursue, there are plenty of opportunities.”

“[Veterans Florida and Piper Aircraft] literally made the process extremely easy for me, especially being in another state at the time… The effort they put in to steer me into the program was honestly amazing.”

Once the internship ends in May, Gonzalez said he’ll use his remaining leave time leading up to his retirement and hopes to continue working at Piper Aircraft upon completing his military service. In the long term, he’d like to finish his aviation maintenance bachelor’s degree from Embry Riddle University and advance his career at Piper Aircraft.

“My biggest takeaway from the Piper internship is that it’s a company striving to take care of their people and in the process build some amazing quality airplanes,” he said.

Gonzalez said he strongly recommends the SkillBridge internship in large part because of how well Wendel from Piper Aircraft and Andrea Marteeny from the Veterans Florida VETS team relayed information to him and ensured everything got squared away during the process. Separating or retiring servicemembers interested in participating in Piper’s SkillBridge internship or have questions about the program can visit veteransflorida.org/register or contact VETS Services Director Jeremy Sinnemaki at sinnemaki@veteransflorida.org.

“[Veterans Florida and Piper Aircraft] literally made the process extremely easy for me, especially being in another state at the time,” Gonzalez said. “The effort they put in to steer me into the program was honestly amazing.”

Gonzalez said he’s fortunate to have discovered SkillBridge before entering the Air Force’s Transition Assistance Program and hopes more servicemembers will take advantage of the program’s immense benefits. For transitioning servicemembers considering enrolling in a SkillBridge internship for aerospace and aviation or any other industry, he recommends starting the search as early as possible and brushing up on civilian interviewing skills.

“There’s a lot of opportunities out there, so I would advise them to first and foremost start early,” Gonzalez said. “Definitely give yourself the opportunity to become familiar with the SkillBridge site and get a feel for how it works.”

Ovidio Gonzalez in front of a Piper Archer DX Aircraft

He continued: “Once you do that, come up with a good game plan for how you intend to present yourself. ​​In my case, I completely forgot how to do any of that because I’d been working for the military for so long. Sharpen up on your interviewing and understand you’re speaking to a different audience from then military when you’re going up for a civilian job.”

From the warm weather to the abundance of aerospace and aviation companies, Gonzalez said he believes Florida is an attractive landing spot and offers myriad opportunities for separating and retiring servicemembers to launch their post-service career.

“The opportunities are far greater in Florida than a lot of other areas,” Gonzalez said. “I can go from working on an airplane or something in the aviation field to deciding whether I want to go to the beach or Disney World — I think that’s pretty great; living the good life as a retiree.”