The demand for pilots and aviation professionals has never been greater, and Lakeland-based international cargo airline Legends Airways created a SkillBridge internship to give retiring and separating servicemembers the opportunity to become pilots or enter a variety of career positions within Florida’s aviation industry.

Florida Air National Guard Senior Airman Justin Dal Colletto is the Flight School Director at Legends Airways and creator of the aviation SkillBridge internship at the airlines’ flight school, Legends Aviation Academy. After seeing industry forecasts showing a shortage in the coming years, he began looking for a way the airline could create a pipeline of new aviation talent.

“We’re facing an unprecedented pilot shortage that’s never been seen before,” Dal Colletto said, citing Boeing’s pilot and technician outlook report. “The demand for pilots and aviation professionals is higher than it’s ever been. Your major airlines all have a mandatory retirement age of 65 years old, so we’re having a lot of pilots hit their mandatory retirement age. However, we’re not recruiting enough pilots to fill those seats and replace them.”

Dal Colletto recalled first hearing about SkillBridge while serving in the Guard and started researching the program after seeing it on a Linkedin community board. Upon learning what the program entailed, he went to work creating a proposal to train transitioning servicemembers to jumpstart their aviation career in Florida.

“I noticed there weren’t a lot of aviation or pilot SkillBridge programs out there, let alone programs available in the state of Florida,” Dal Colletto said. “That’s what led me to start drafting the MOU [Memorandum of Understanding with DOD] back in August of 2021. From there, we eventually received our approval and launched the program in September.”

SkillBridge enables active-duty servicemembers with commander approval to gain work experience with employers within six months of separating or retiring from the military and maintain their DOD salary and benefits during the training period. 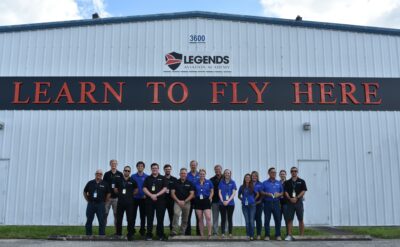 Dal Colletto said he modeled the airline’s SkillBridge internship after their civilian pipeline program, so whether a servicemember has zero experience or twenty years experience in aviation, the training covers new topics the participants have never explored before.

“We set out to establish a program that took a very well-rounded approach to commercial and civilian aviation to give transitioning servicemembers from any background as much exposure as possible to the industry in all different facets,” Dal Colletto said. “Once they transition out of service, not only will they’ve received valuable experience working on ground operations, dispatch, and training, but they’ll also have additional exposure of piloting and flying that they’ll be able to take to any career field post-separation. With us being a cargo airline and a flight school, not only are we the training organization but we’re also the end-goal employer.”

The Legends Airways SkillBridge internship is split into three tracks: wingman, pilot, and aviation mechanic. Participants in the Wingman Track are instructed by aviation and aerospace industry leaders and receive hands-on training in each of the airline’s departments, including dispatch, flight following, maintenance, training, and the academy.

Servicemembers interested in earning a pilot’s license have the opportunity to enroll in the Academy’s Pilot-Training Track, with options ranging from private licenses all the way to commercial pilot. Legends offers SkillBridge participants subsidies to off-set costs associated with the training, such as fuel and examiner fees.

In partnership with Veterans Florida, Dal Colletto worked with VETS Program Director Jeremy Sinnemaki to develop the third track for the Legends Airways SkillBridge internship: the Aviation Mechanic Track, which is designed for servicemembers with a background in the field and encompasses diagnosing mechanical or electrical issues as well as repairing or replacing aircraft components.

“Veterans Florida has many years of experience placing servicemembers into careers in the Sunshine State and it was a natural partnership that allows us to continue growing our program and attract dedicated and qualified individuals,” he said. “With Florida taking the lead on SkillBridge, the state is helping employers and companies such as ourselves find highly qualified individuals to join our team and has recognized the quality, integrity, and the drive that is found within an American servicemember.”

Dal Colletto added: “As a servicemember myself working for a veteran-friendly company, we are beyond humbled that servicemembers would consider us to be part of such a huge step in their life transitioning out of the service and we’re honored to recruit and train the future of Florida’s workforce.” 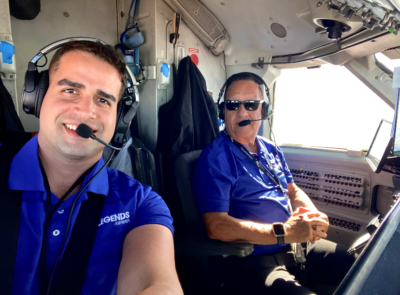 Legends Airways’ first graduate of the SkillBridge internship is U.S. Navy Lieutenant Paxie Cordova, who flew maritime patrol aircraft during his 12-year military service. Having not flown for a few years prior to his transition, he saw the program as an opportunity to get back in the pilot seat and be near his home in Jacksonville.

“I applied to Legends to get back in the game and help me get into the Reserve squadrons by showing that I’m currently flying,” Cordova said. “It’s worked out great; way better than I was shooting for. Once I started with them and they realized that I had flight experience from the Navy, the internship got cut short, and I just started up flying for them full-time instead.”

For servicemembers without any experience, Cordova said the airline is a great opportunity to get a foot in the door.

“Legends Airways is a very promising company for any servicemember who’s ready to commit to a lifelong career in aviation,” Cordova said.

Separating and retiring servicemembers interested in the Legends Airways SkillBridge internship or have questions about the program can visit veteransflorida.org/register or contact VETS Program Director Jeremy Sinnemaki at sinnemaki@veteransflorida.org.